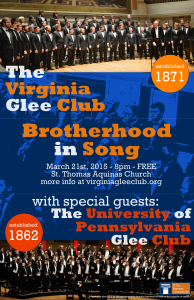 The Virginia Glee Club is pleased to host the University of Pennsylvania Glee Club in Charlottesville this spring for a collaborative concert at St. Thomas Aquinas Church, featuring choral works for men’s voices performed by each group and in a combined (enormous) chorus. Founded in 1862, the University of Pennsylvania Glee Club is one of the oldest continually running glee clubs in the United States. They are known for its eclectic mix of Penn standards, Broadway classics, classical favorites, and pop hits. The Virginia Glee Club was founded in 1871 and is also one of the oldest all-male collegiate vocal ensembles in the United States. Throughout its history, the Virginia Glee Club has been consistently recognized as a leader among American men’s choruses, performing a variety of sacred and secular music in the classical tradition.