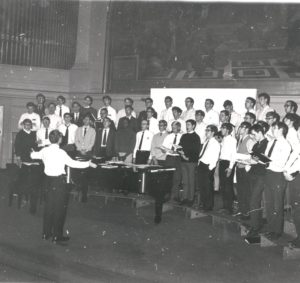 The UVA McIntire Department of Music presents the 51st annual Messiah Sing-In on Tuesday, December 4th at 8 pm in Old Cabell Hall. After 50 years of leading the event, Professor Donald Loach has passed the baton to Michael Slon, who will lead the concert this year. The Messiah Sing-In benefits the University’s choral ensembles. Get TICKETS via the UVa Arts Box Office and be there to participate in a UVa tradition that has reached its 51st anniversary!

Professor Donald Loach started the tradition of the UVA Messiah Sing-In in 1968 as one of the first in the nation. It was a simple beginning with no orchestra. Yvaine Duisit was the organist, and Professor Walter Ross played double bass. Ross has continuously participated in the Messiah Sing-In since its inception. Later, an orchestra began to develop, all voluntary and unsolicited. In the beginning, churches in the area provided scores. However, in 1974, with the help of generous donations, scores were purchased. Community members, students and faculty joined the core group of singers, which consisted of the University Singers and the Virginia Glee Club and today also includes the UVA Chamber Singers and Virginia Women’s Chorus. Donald Loach has sought to retain the joy and simplicity of the occasion without any professional pretense, orchestral rehearsals or professional soloists. The UVA Messiah Sing-In remains a simple and joyous event, relying on the University and Charlottesville community to come together to sing and perform one of the greatest oratorios ever written.

Participants for the Sing-In sit in sections arranged according to vocal part (soprano, alto, tenor, baritone), and the orchestra sits on stage. Non-singers are encouraged to listen from the Loge and Balcony. Copies of the vocal score will be available for those who do not have their own, and orchestral parts will be available for instrumentalists.

Come sing or play your hearts out!